As one of my first steps into the world of ‘Azure’, I wanted to take a look at the idea of transition. This tutorial is taking the approach from an ‘Azure’ starter and scoped to the technical implementation.

During the same time, I am looking to also write the business ‘why’ case; why would I as a business do this and what are the benefits and flaws… lets be straight; I work with technology and am not a salesman, there are two sides to the coin, no matter whom tries to hide the fact.

I want to keep my onsite services, but extend into Azure as a seamless hybrid approach, looking at how the various service opportunities can communicate and the how to ‘best plan for the future’ from a varying point of view. So, first topic to cover is connecting the world of Azure to my onsite infrastructure with the use of a Site-to-Site VPN.

Now, the saying ‘a picture can paint a thousand words’ is my approach in most of my personal learning; I also think this seems to work with most people and therefore let’s start with a picture: 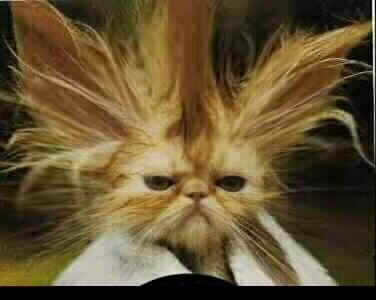 Not quite the correct hair colour (also a little too much). But this is my mindset in approaching Azure, with the amount of terminology and abbreviations; saying that, I think this is the same with any new technology, so rather than focus on a list of terms at the start, I will summarise at the end of the tutorial, rather than the start.

Do not worry if you do not understand each element or term, as you proceed through the tutorial.

Example data has been used in the table and will be used throughout the tutorial, however the hope is by the end, that you will understand exactly what the particular data is used for.

My setup is a little different than most, but in the simplest form:

Create the Virtual network, think of it like your physical network infrastructure, initially without the logical part…. A bit like you have just made yourself a little box inside the cloud…. Has to be somewhere. Whilst create  e.g. VNetwork01:

Change subnet, by selecting network and then custom DNS: 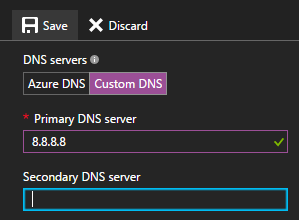 Add any subnets you want on the Azure side: 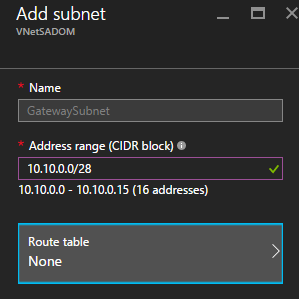 Here is where it will change, add a virtual network gateway: 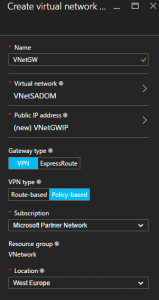 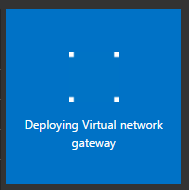 So now I have my Virtual Network Gateway, the edge of my box….

….so now I have to effectively create the virtual customer premise side…your remote part but in Azure

this could be thought of as the edge device on your site network. 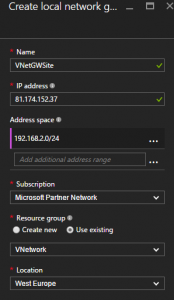 Now, I need to create the connection between the gateways, so I select my previously created virtual network gateway (not local): 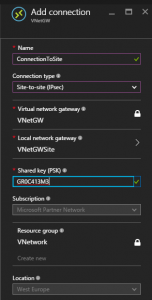 Theme by Anders Noren — Up ↑

We use cookies to ensure that we give you the best experience on our website. If you continue to use this site we will assume that you are happy with it.OkNo
Revoke cookies